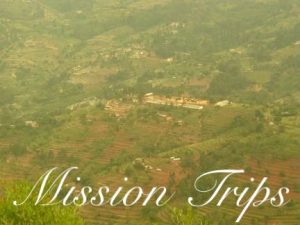 THE ESSENCE OF MISSION TRIPS:-While Charitable giving is one of the noblest and most praiseworthy acts of generosity, nevertheless it makes a world of a difference to make a special connection with those whose lives have been touched and transformed forever by ones act of mercy. It forms a special human bond between the giver and receiver and the cycle is completed as an alliance is forged. It is true one may have nothing to give in return but the joy and happiness emanating from such an act of kindness is the profoundest and most fulfilling experiences to the giver and is priceless.

Following this notion KUSARD tries whenever it can to organize trips for the sponsors of its programs in order to give them an opportunity to meet those  whom their benevolence had impacted and to be thanked in person by them. Although in recent years we have not arranged any Mission Trips, in our 22 years of Service since inception, we have had occasion to plan about 6 of these and their effect on the lives of the visitors and those they visited was unprecedented.

THE 2004 MISSION TOUR TO KENYA:
The very first Mission Trip occurred in 2004 and its aim was for some of our sponsors to visit sites in Kenya and see for themselves the work going on there in the communities they supported and some of the accomplishments, the communities had realized through their partnership with the sponsors. It was to be a familiarization tour and also an opportunity for the delegates to meet face to face with the people their philanthropy had touched.
Since this was to be the first tour organized by KUSARD, it would also serve as a learning experience for future Missions. To make it succeed, the Tour Company undertaking the tour part of the Mission Trip – i.e”African Hospitality Holidays” and the KUSARD Committee in Kenya, cooperated to make the tour an experience to remember for our visitors. 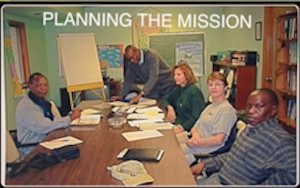 In retrospect I can say, the trip exceeded all our expectations and from it we drew many ideas to incorporate in future Missions, one of which was scheduled to follow in the Summer of 2006.

Some of the Mission team who helped plan the 2004 trip are seen here at work before the commencement of the trip.

2004 IN PERSPECTIVE:
The year 2004, was a watershed moment in KUSARD’s history.
Back in 2002 the idea to visit the Diocese of Machakos in Kenya was suggested by Simon, KUSARD’s Executive Director, to the “Friends of Kenya Committee” of the Wayne Presbyterian Church, a newly formed committee that had been started under the auspices of the then pastor of that church community, Rev. James Brassard.
At the time, the idea seemed nothing more than just a pipe-dream. Firstly, it looked too intricate to pull off; especially with KUSARD’s limited resources and the fact that, then, just as today, KUSARD depends on volunteers for its operations. It appeared then, that, the burden of engaging them in a complicated task like this one would be pushing the envelope. Then, as if this was not enough, September 11 happened and everything changed. The prospect of a trip under the prevailing climate of fear due to terrorism, became the nail into the coffin of any such notion for a Mission Trip. It was hard to allay people’s fears for travel after Sept 11 2001 and world tourism plunged to the doldrums. The events of September 11 2001 had created fear in the hearts and minds of the traveling public and many did not want to fly, unless they had to, owing to the precariousness of the time.
Then almost as if in defiance, the Mission team, refusing to be held hostage by fear and wanting to stand up for a cause, decided to collect itself together and go ahead and resurrect the shelved plan for a trip to the African Continent.

Preparations started in the Summer of 2002. A series of meetings were convened to discuss strategies for the trip. The KUSARD committee in Kenya also started making arrangements on how they would receive the visitors who planned to stay and work in the community for a week. The Catholic Relief Services in Kenya was requested to facilitate the visitors’ trip as they toured and worked in the Machakos Diocese. Their Global Solidarity division responded favorably and provided all the transport needed for the duration of the stay in the Diocese. The Member of Parliament of the Kaiti Constituency, Hon. Gideon Ndambuki made a substantial personal contribution towards the initiative by providing full lodging and board to all the 7 visitors for a week.

From the USA, the Mission team, solicited for drugs, medical supplies, children’s toys etc from companies and individuals interested in donating items for the trip and the response was beyond expectations. A complete account of our first Mission trip can be found by clicking here or the link at the bottom of this page. Cathryn Weiss, one of the trip makers representing the Diocese of Paterson, wrote a comprehensive report of everything that happened on the ground from start to the end.

The Diocese of Machakos hosted the team for one week, during which time, much was done and new projects started. All the on going programs were visited; (i.e. food, health center, schools, water and AIDS campaign programs; orphanages; homes of handicapped kids). The level of commitment on the part of KUSARD volunteer team and the dedication of the community in matters of development, despite the poverty, which dragged them further and further down the road of destitution, surprised the delegates.

In our very first meeting with Bishop Martin on our arrival in his Diocese, he assured us of his great desire to work with KENYA/USA CHRISTIAN RELIEF & DEVELOPMENT, INC in matters of development in his Diocese. He went on further and explained how he had been impressed by the community of St. Therese Succasunna in the Diocese of Paterson in New Jersey and how he did not know exactly the best way in which to express his gratitude to them and to let them know what their kindness and benevolence had come to mean to the lives of the parishioners of St. Cecilia. As he had an on coming trip planned for the USA to attend the Golden Jubilee of a priest friend of his, he felt, the least he could do was to include in his trip a visit to Succasunna to personally pay tribute to those special friends of St. Cecilia who had enabled such wonderful things to happen in his Diocese of Machakos.
CALL TO SOLIDARITY:
Urged and promoted by US bishops, a trend is emerging whereby Dioceses form ties with other Dioceses in under-developed countries; to work out ways and means of enriching each other in various aspects of human developments; spiritual, cultural; economic, etc. To Bishop Martin, it appeared time was ripe for such solidarity to be extended between the Diocese of Machakos and that of Paterson; observing that the necessary and sufficient conditions were already in place through the already existing sisterhood of St. Therese and St. Cecilia Faith Communities.

IN THE FOOTSTEPS OF BISHOP MARTIN:
Soon after Bishop Martin’s return to Kenya, Fr. Daniel arrived in the United States as a guest of St. Therese Succasunna. He was to assist with that year’s fund raiser on the weekend of September 25th & 26th 2004 at St.Therese. His visit was as successful as that of his boss – Bishop Martin, and did a lot to advance KUSARD’s cause.
At the end of his visit, a meeting with the Bishop of Paterson Diocese was arranged and it took place in October 01 2004 when Fr. Daniel Kitila, of Machakos Diocese and Simon K. Maweu, KUSARD founder, had the privilege to meet with Bishop Arthur Serratelli after he celebrated an early children’s mass at the St. Therese Grammar School in Paterson. Present besides His Most Rev. Bishop Arthur was Fr. Luciano Cruz pastor of St. Therese Paterson and Deacon Mr. Nick Varsalona, Principal of the parochial school. In the early morning meeting the relationship of St. Therese Paterson & Succasunna and that of St. Cecilia was explained to bishop Arthur and in addition the issue of the possibility of the Diocese of Paterson forming a solidarity with that of Machakos was raised and he was so gracious as to embrace the idea and promised to follow up with Joe Duffy of the Catholic Charities who has been part and parcel in the formation of the sisterhood between St. Therese and St. Cecilia in Machakos which is then almost 5 years old.
I am sure the Holy Spirit will bless and guide this noble process, which I know will be made whole in God’s good time. And whenever this would happen, Joe Duffy said,” It will start with a visit by a delegation from the Diocese of Paterson to the Diocese of Machakos as guests of Bishop Martin.” For now, all that remains is just pray and hope while the wheels of time turn and slowly grind towards that desired goal, Solidarity.