EDUCATION AS A TOOL TO FIGHT POVERTY

Homepage EDUCATION AS A TOOL TO FIGHT POVERTY 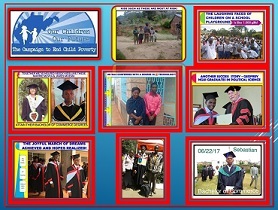 Someone said,“…You cannot command success, but if you do more, you will deserve to succeed…“. Borrowing from the same age old adage, although in life there are no guarantees, we in KUSARD believe that, Education is one of the proven methods through which to eradicate poverty.

If someone acquires education and attains the necessary credentials associated with their learning, finding work, or having the understanding and knowledge to start one’s own business raises the chances of success in any of a variety of opportunities in one’s home country or even beyond ones native land.

True, in an environment of high unemployment like in Kenya, having and education but no job, can be one of the most frustrating experiences for those who have strove all their lives for that degree believing it to be their gateway to better life, nevertheless, the acquisition of education changes ones outlook and prospects of life and prospect for success.

With this tenet, KUSARD does all it can to help those kids from very poor backgrounds to follow their dreams, and many kids, including the one whose story is told here below, and many others, have sought our aide and managed to either, climb the ladder of success or are still somewhere along that continuum in their lives.

In African countries, education for girls used not to be as valued as that for boys. Parents, and especially fathers tended to be preferential when it came to deciding in whom to invest their scarce resources and had to choose between a daughter and a son!
However, for Ruth Kalekye, who was the first of 4 kids was lucky to be the eldest child, followed by two sisters and an only brother who was a distant last in the family; 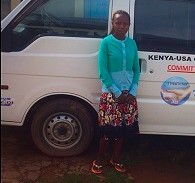 To that end, Ruth did not have to face that dilemma. But strangely, that was not what Ruth’s problem was. The obstacle which stood in her way like a lion, was the poverty into which she had been born! Her dad had sold the small parcel of land which he had inherited from his father, to try and put food on the table for the family. He sold his precious traditional inheritance, piece meal until in the end, there was little more to sell than the only ground on which the family’s small grass thatched mud house stood!

Luckily then, Primary School Education had become free when Ruth started school and that was a blessing for her and she made the best of it. She worked as hard as she could, as this was her only path out of poverty for her, and in the years that followed, her performance in school continued to impress her teachers and when her 8th year of Primary School came and she sat for her final National Exams, she passed with flying colors, but oddly enough, instead of being happy and joyful for her high achievements, she was sad!

She had been admitted to PRECIOUS BLOOD HIGH SCHOOL, one of the most acclaimed Girls’ High schools in Kenya, with a reputation for academic excellence; and her sadness was due to the knowledge that, she would never realize her High school aspirations because, unlike in Primary School, High School was not free and if you were unable to pay for the high tuition required, the doors to further education were slammed shut, right into your face! And your future!

It was during this critical crossroad of her life that Ruth turned to KUSARD for a way forward and by a stroke of luck, KUSARD was able to find a sponsor for her in the States who enabled her to pursue her High school career; And as might be expected from past performance, she worked even harder than before and more diligently, in High school,  knowing well how fate had favored her when so few options existed for her in life to break her cycle of poverty.

At the end of her 4 years of study, Ruth managed to once again pass her final high school exams with accolades and was admitted to a Government University in Kenya, but inevitably, as fate would have it, her poverty still haunted her and now seemed to put a stranglehold on a promising brilliant Educational career. With far more higher school fees required for a University degree, Ruth knew this was the end of the road, for she knew she could never afford the $1,000 needed for her first year of University.

When she came to see me, as I was vacationing in Kenya, accompanied by her mom and with a University Admission letter in her hands, she was in tears of despair and hopelessness. Yes, she needed a lot of money  than she had ever requested from us before and she didn’t know where in the world she was going to get it or where to turn for help, because, where ever she had gone up to this point asking for help, she was either turned down or send from pillar to post as a way of frustrating her or trying to break her will down and in the end was in at the verge of giving up. In this hassle, a year had already come and gone and by the time she came to KUSARD, all her colleagues had already started school and were soon going to their second year of University that September of 2016, while poor Ruth still pounded the Kenyan unforgiving dusty streets.

In my experience, I have come to believe in this one thing! Things may look as bad as they can be at any one time  in our lives, but God never sleeps and He answers all prayers. And certainly in my own experience, having faced walls which appeared insurmountable, yet with faith and perseverance, having a door in the end crack open; I could easily identity with Ruth’s predicament so when she came to me once again and explained her condition, I was crestfallen for not being able to give her an immediate answer right then. But long after she left, I was haunted by the look of despair on her face and I tried to sleep on the problem, wondering what answers I could give her when she came to see me next day or so. I deemed she had done all she needed to do to break with her reduced circumstances, yet fate still presented her with roadblock and my hands seemed tied to be of much help to her due to KUSARD’s financial constraints and unable to afford her any resolution to the plight she faced.  Seeing the hopelessness of the situation, I had been forced to turn to one of our old supporters who on learning of Ruth’s predicament had decided, without any hesitation whatsoever,  to come to her rescue. And what a miracle it was! Secretly I cried alone, for Ruth, in my room at night! I cried because God had answered my prayers for her and tomorrow when she would come to see me, I would have a happy answer for her. In fact I think I was happier than her for the way Events had turned out. For this I wish to pause and bless God for Al P and Deanne for me for answering my prayers for Ruth.

And so, unbeknownst to Ruth of all what had transpired behind the curtain except only that, somehow the heavens had smiled on her, when the University doors opened that September, Ruth would be joining her friends although one year later; but it was better late than never!

One thing I knew! Ruth was in the seventh heaven for the way fate had shone a light on her face and I blessed her and urged her to continue with that burning desire and spirit for success that she had and I could assure her, with God’s Grace, the future was hers to conquer and would, in the process become a model for others to emulate!

APPEAL:
Anyone interested in helping Ruth or other girls like her or any of our other Programs, please use the PayPal portal below:

Thank you, in advance!